….is unfortunatley NOT easier than running in the US. Bummer.

Hubs and I went on a little get away to Canada (or as we like to call it Cananannda) this weekend.

More on that later. First I want to tell you about my first run in another country.

We really wanted to get an outside run in before the 5k next weekend. What a great opportunity since the beautiful Stanley Park was just right down the road from where we were staying.

We found a nice loop around a lake inside the park that was just over a mile.

we ran around that three times

It was around 45 degrees and cloudy. We were just happy it wasn’t raining b/c it had rained pretty much all day the day before.  Glass half full.

Started out with a brief warm up walk and stretch. My real goal was to make it the first whole mile without stopping.

That was a milestone. Haven’t ever ran a whole mile without stopping outside running on “real” ground before. I was pumped.

Paul was nice enough to with me the first two laps. He is so much taller than me (longer stride) and has been in the Army for like ever, so yeah he is just a tad bit stronger runner than me.

He took some pics while we were making our way around the lake.

there were swans all over the place...dodged many a pile of green swan poop 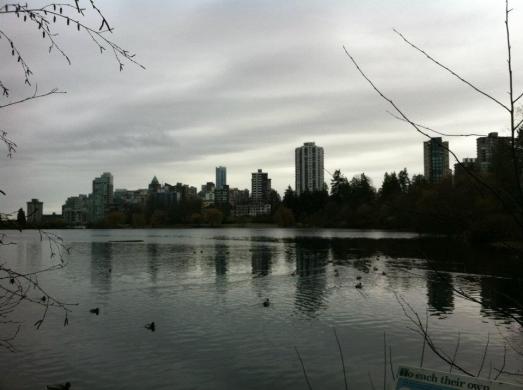 Vancouver! Eh. or Aye. not sure how you spell it?

he was scared b/c I was chasing him and look at how fast I am!! he's a goner!

On the third lap we ran at our own pace. Paul finished the mile in like 8 min I think? Sheesh. Me= Jeally. Jeally= Jealous.

On the plus, he was able to get some pics of me finishing up.

pictures lie. I was totally running.

The third mile was around 14 min. Not bad considering I walked three times. Didn’t get a totally accurate time for the first two laps, but overall I am felt really good about my first 3 miles outside.

Pretty excited to see what happens at the 5k on Saturday!

all DONE and all smiles. Sweaty and sore, but still smiling

Have you ever run in another country?

What have you had to dodge while running?

My name is Cinnamon aka...CinnaMOM and I am a wife, stepmother, professional and a wannabe athlete who eats well. I pray a LOT to help me do all of the above....

Find out what I’ve been up to

Error: Twitter did not respond. Please wait a few minutes and refresh this page.